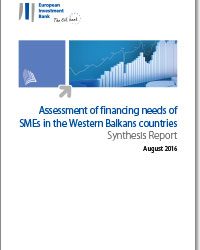 In 2016 the EIB commissioned a study to assesses the financing needs of the SMEs in the Western Balkans countries and the market failures that are constraining the development of the SME sector.

END_OF_DOCUMENT_TOKEN_TO_BE_REPLACED

EIB Group reaffirms commitment to financing in the Western Balkans

The European Investment Bank (EIB) Group has confirmed its role as one of the leading international financiers in the Western Balkans. It has signed EUR 6.4 billion of loans since 2006 and reimbursed around EUR 1.2 billion to projects in the region only in the last two years. An EIB Group delegation, led by EIB President Werner Hoyer and EIB Vice-President Dario Scannapieco has participated yesterday in the Western Balkans Summit in Trieste (Italy). In several meetings and the official dinner with heads of states and governments, the EIB representatives reaffirmed their commitment to further support the region on its path towards European integration.