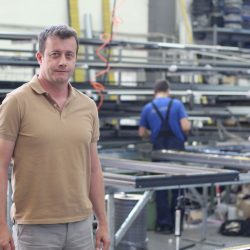 Alu-point is a company that specialises in the production and export of aluminium windows, based in Sarajevo, Bosnia and Herzegovina and founded by Taib Hido.

Born in Sarajevo, Taib went to Antwerp as a refugee during the war, aged 23. “At the beginning I started working in restaurants, also learning the language a bit. With time I became Maître d’hôtel in a high-end restaurant, managing 52 people,” Taib explains. But while he enjoyed his job, he was also active in window production, helping out in the family business on the side.

“I had strong family connections in the windows business. I had first worked on windows with my uncle and it was something I was passionate about. At some point around 2007, I felt it wasn’t possible to maintain both career paths and I needed to make a decision to focus on one. Looking back, I’m very happy with my decision.”

Taib moved back to Sarajevo to focus on window production. Initially, he worked with his uncle to expand his knowledge. By 2012, however, he founded his own company, Alu-point, and started his own production, using his contacts back in Belgium to strike some solid partnerships: “We work a lot with ALDI in Belgium – they’re one of our largest clients,” he adds.

Today, Alu-point produces in Sarajevo, where it employs 30 people, but it maintains an office also in Belgium and its clients stretch beyond Bosnia to Belgium, Germany, Norway and the UK.

Revenue has been growing steadily and in 2018, Taib benefited from an EU-guaranteed loan from ProCredit Bank, which he used to purchase computer numerical control (CNC) machinery for production. This top-of-the-range CNC equipment has helped expand the business, taking it to the next level. “Most companies don’t have this sort of machinery. It gives us a competitive edge: it’s faster, higher quality, more precise…If I do something, I always aim at doing it well, so this machinery really helped us a lot,” he adds.

With the new growth generated from this addition, Taib expects to be able to recoup his investment costs for the machinery within five years, while putting the business on a more sustainable path, ensuring that he is able to provide for his employees: “The current crisis is hitting everyone hard. But we are keeping up production. Every person who works for us has family too. It’s important that we are able to keep going because many people are stuck without work. Our workers are still being paid on time and that’s something that makes me feel very good.”