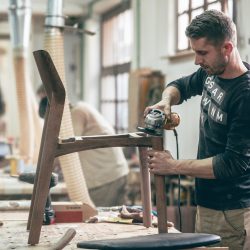 Bosnia and Herzegovina’s long tradition of woodwork owes much to its geography and ample supply of quality raw materials. With just over half its area covered in forests, it should come as no surprise that many world-renowned, handcrafted furniture brands come from the country.

One of them is Artisan. From its roots in a family grown, brick and mortar shop to fame as furniture designer supplying foreign markets, Artisan’s climb to the top is the culmination of a love for wood nurtured over 50 years.

Its founder, Fadil Costovic is proud to recount how joint funding provided by the EBRD and the European Union (EU)’s Enterprise Development Investment Facility (WB EDIF) helped craft his success.

A vision for a timeless brand

Artisan relies on traditional manual woodwork with a modern twist to manufacture wooden elements and furniture from deciduous trees such as walnut, chestnut, oak, cherry, elm, maple etc. The company supplies its loyal customer base in the Republic of Korea, the Netherlands, Belgium, Switzerland, and Germany.

Growing up, Mr Costovic spent his days watching his grandfather work in their family-run wood processing workshop. Learning the trade alongside family laid the groundwork for starting his own wood processing company in 2007 with 15 employees.

“When it came to developing our business, we faced many challenges, and barely had any help to address them,” he says.

“It was clear to me that we had the technique, but lacked the right distribution channels. We also required the know-how to identify the appropriate international standards to implement.”

Attracting skilled carpenters to a relatively new company, knowing how to build a strong brand identity, and winning over foreign markets are some of the recurring challenges artisan businesses face on their path to growth.

With its sights set on expanding production and increasing sales volume, Artisan approached the EBRD for assistance in 2016. Funding from the EU financed a consultant who worked together with the company to surface everything needed to expand their overcrowded facilities.

The manufacturer acquired state of the art CNC machines – computers programmed to automate woodcutting – which worked to significantly reduce inefficiencies.

Artisan was then introduced to Ruđer Novak-Mikulić, an award winning industrial designer from Croatia, who was involved in 2018 in the roll-out of another production line called ‘Insan’.

Many blueprints, technical drawings, and research projects later, all under the auspices of the EBRD’s advisory services to SMEs, Artisan developed an entire furniture collection based on Ruđer’s creations.

Nowadays, Artisan’s production is entirely oriented towards international markets, with 95 per cent of its turnover generated from exports. Its increased turnover prompted them to hire more highly qualified staff to support production. At the end of 2018 they had a total of 155 employees.

“At the same time, taking on projects in the United States, Australia, China, and being able to name Starbucks as one of our buyers demonstrate how far-reaching our efforts have been, with the EBRD as the wind at our back.”